One of the most expensive monkey corpses in the world

ROSWELL: Man behind UFO crash proof mixed up in string of alien hoaxes 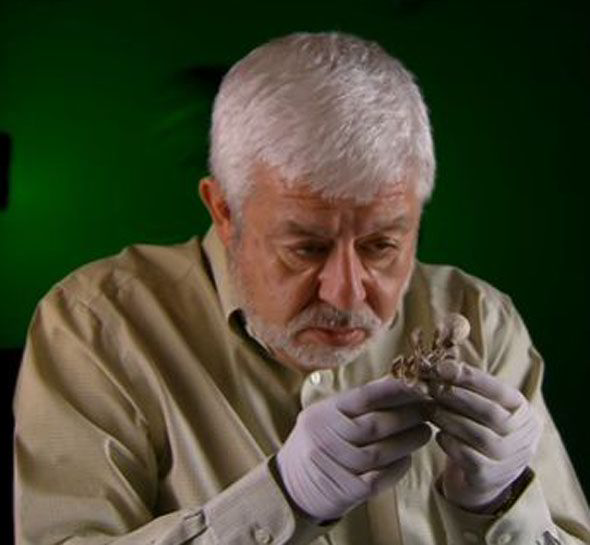 The point of this article is “the everlasting search for proof”, that so many people smear with loads of (censured) false evidence. UFO’s are a money industry, you might as well realize it. You might as well understand that the bigger part of all proof of extra terrestrial life is hoax.

This makes any investigation very hard to pursue. On one hand the truth may be hindered by the government, on the other hand the truth are constantly hindered by those who has kept such an open mind their brain fell out all over us, just as we were about to find something real.

Honestly, no proof is better than the faked ones that are believed necessary to keep the interest burning.

In my earlier article I clearly described that Roswell, was not the first alleged landing point for UFO’s but, Europe and Germany. This was years before Roswell. The Roswell incident are only a copy of what the whole world already was searching for.

Sometimes, I just feel “now how did you reach this conclusion, really?”. Always start by reading facts, no country is an isolated island (this is kind of funny because we’re all looking for extra terrestrial life, but wont look at our neighbors).

Scam artists as in UFO hoax dealers, should be stripped from all public reliability and excluded from any group that conduct investigations or serious research. I don’t think I am tough, I think this is the only way to give the subject of UFO back its credibility.

The article below is written for Express and tell the background story to my new subject (proposing real evidence). It is utterly important for me to find the truth, not only forwarding A “truth” heard from somewhere else but, being the one who found the source. I think, this is the only truth anyone should want.

***THE man behind the release of the so-called ‘smoking gun’ new Roswell photographs that supposedly proved an alien crash-landed a UFO near the New Mexico town in 1947 has previously been linked to a series of extra terrestrial hoaxes.

THE man behind the release of the so-called ‘smoking gun’ new Roswell photographs has previously been linked to a series of alien hoaxes.JamieMaussan, claimed to have proof of the notorious alleged UFO crash,  once paid £15,000 for a skinned monkey believing it was an alien corpse.He also supported one of the most astonishing alien hoaxes ever attempted.Mr Maussan sold tickets to see the first release of copies of slides purporting to show the Roswell alien corpse at the ‘Be Witness to the Change in History’ event in New Mexico, America.The photos promised to be historic and irrefutable proof of the legendary UFO crash near the New Mexico town of Roswell in 1947.

But the long-awaited disclosure has been widely panned by sceptics and even UFO hunters as a damp squib, with many suggesting the picture shows a mummified human child in a museum exhibit case.

The Roswell myth is that the US military found an alien corpse in a crashed space craft on a remote ranch but kept it hidden from the public ever since.

It has long been regarded as the world’s biggest alien mystery, since it first emerged. 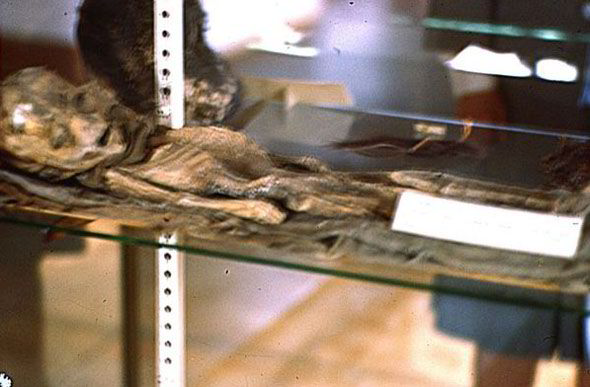 I never did it for money, I knew I was going to lose cash even before starting the organisation of the event, but I didn’t care. The forensics experts explained in full why this is an alien.

Pictures which surfaced 20 years ago, alleging to show atop secret alien autopsy were later proved to be fake.MrMaussan, who runs his own alien investigation TV channel tercermilenio.tv, is described as Mexico’stopufologist, but has promoted a number of well-documented alien hoaxes.Staggering hoaxes MrMaussan has been involved with include the ‘Metapec creature’, a smallalienesque corpse which was later exposed as an amazing hoax using a skinned small monkey to create the weird-looking beast.In around 2007 a story surfaced that the small alien-like creature had been caught in a rat trap on a remote Mexico ranch.Mr Maussan reportedly bought it for around £15,000 and spent years trying to prove it was of alien origin.

But in 2010 taxidermist Urso Ruíz confessed to skinning a squirrel monkey and leaving it on the ranch.

He later passed a lie detector test and scientific investigations backed him up.

Mr Maussan insists he was not in on the hoax at any stage, and was more likely a victim of it.

His involvement in the release of the ‘Roswell slides’ has cast even more doubt on legitimacy of the much-hyped event, that will have received hundreds of thousands of pounds in ticket and pay-for-view sales, according to UFO online forums.

Mr Maussan has been an ardent supporter of Dr Jonathan Reed, who still maintains the truth one of the most far-fetched alien discovery hoaxes on record. 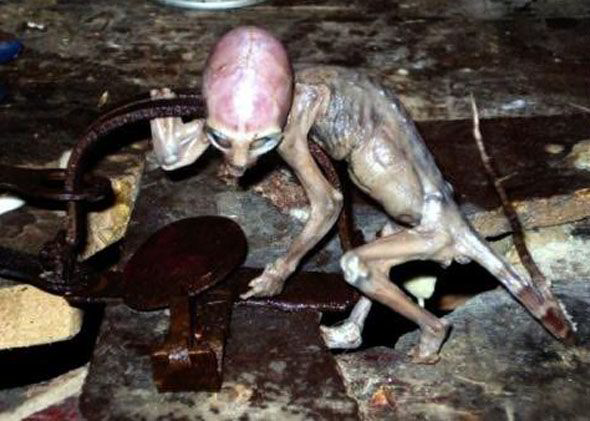 Mr Reed claimed to have stumbled across an alien and its UFO while walking his dog in October 1996 in the Cascade Mountains.But the ET allegedly vaporisedhisfour legged friend, so he killed the other worldly visitor, took the corpse home and filmed it.The story continued with allegations of Mr Reed having to go underground to avoid ‘Men in Black’ agents who killed a friend, and that the alien came back to life.The alien in his video, pictures and book were later exposed as a rubber dummy.However, Mr Maussan is documented devoting a large amount of time to getting the ‘truth’ out about Mr Reed’s account.

More recently, Mr Maussan investigated and pushed the credibility of a picture which emerged of a man being watched by little green men, which was also later exposed as a digitally manipulated hoax.

The website www.ufowatchdog.com, which says it exposes alien and UFO hoaxers, includes a section devoted to Mr Massan.

It says of him: “Promoter and supporter of various UFO hoaxes.

“Constantly claims to have scientific proof, but never seems able to produce it when asked.

“Claimed to have radar tapes confirming UFOs in Mexico airspace. Was reportedly asked for the tapes – the tapes never came to fruition.”

It lists a number of other hoaxes he supported.

It has been reported that up to 6,000 people attended the ‘Be Witness to the Change in History’ event on Tuesday.

Premium ticket prices vary from as much as £1,000, according to website Ticket Master, but according to people who attended and commented on Facebook most were between £20 and £60.

A conservative average price of £40 a ticket, Mr Maussan and co-organisers could have taken in at least £240,000.

Those not able to attend could pay between £10 and £15 to watch it online.

It is not known how many did, but the live stream crashed on the day, so the takings could be considerably higher. 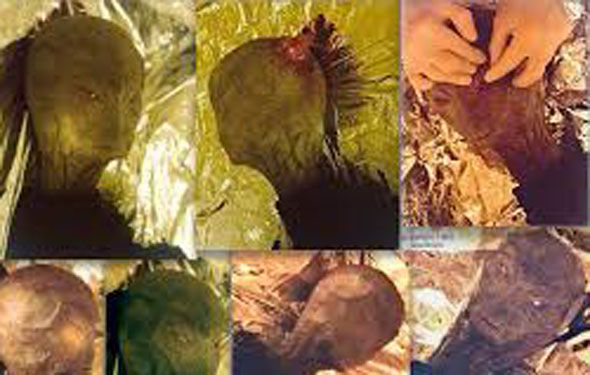 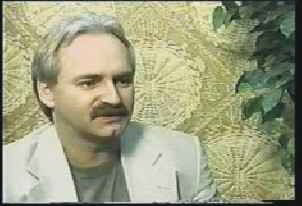 The UFO of the alien Reed claims to have killed

British UFO investigator Nigel Watson from Plymouth, said: “The whole event wasacynicalmoney making circus ring masteredbyJamieMaussan, who has a track recordforpromotingan whole string of UFO reports and images that have been revealed to be hoaxes. Not only does the alien look like a mummy itisobviouslyin some type of exhibition case.”This must be considered the lowest point UFO research has ever descended to.”But Maussan has been reported as saying after the conference when asked if it was a profit making venture, that he lost money pouting it on.He said: “I lost about $100 thousand in the event, even though we had six thousand people in the auditorium and a few thousand watching on the Internet.

“I never did it for money, I knew I was going to lose cash even before starting the organisation of the event, but I didn’t care.”

He also maintained he had proved the slide showed an alien, adding: “The forensics experts explained in full why this is an alien.

Today he insisted on Twitter it was not a money-making event and said it was not clear if the organisers would ever recoup their investment in the event.“We also presented the analysis from photography experts stating that the picture is real and from the late 1940s.”

He also took a swipe at critics.

Translated from his native Spanish, he posted: “The difficulty is that you present the evidence and research and the critics, as they have nothing and are just looking to offend without a single argument.”

And he blasted at one disbeliever: “Your comparison is absurd. The size of the head, the shorter arms, lack of mammary glands , you have elbows or knees.”